Frida Kahlo: Making Her Self Up 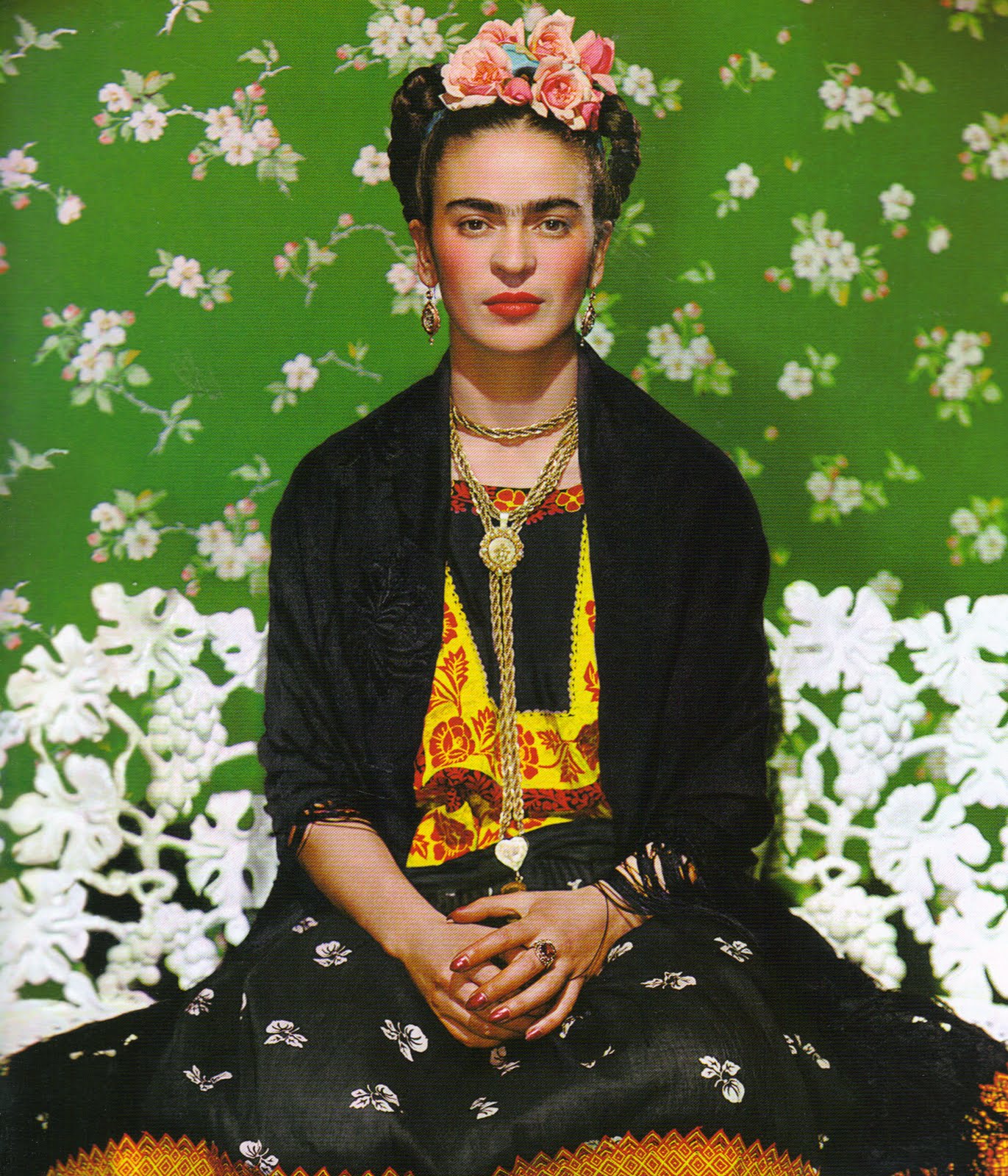 A few months ago, Mr. Michie surprised me with tickets to the Frida Kahlo exhibition at the V&A, Frida Kahlo: Making Her Self Up. She has long been one of my favourite artists and someone that I feel an unexplainable deep connection to. Our tickets were for an early morning entry, which was perfect. It was busy, but not too busy; so you had the luxury of lingering over a piece without the worry you were in someone else’s way.

The show was beautifully presented and laid out in manner that represented and reflected significant stages in her life. There were photographs taken by her father I had never seen before as well as some of her earlier sketches and drawings. There was film footage of her and Diego Rivera at their home, La Casa Azul in Mexico. The Kodachrome colours of the film gave it such a vibrant and dreamy hue.

Upon Kahlo’s death in 1954, her husband placed many of her personal belongings inside a bathroom in their home and locked them away. La Casa Azul later became a museum to Kahlo’s life. Shortly before his death in 1957, Rivera made a request to a close friend, Dolores Olmedo, that this room containing Kahlo’s intimate belongings should remain locked for the next fifteen years. Olmedo, seriously took Diego Rivera’s request to heart and decided to keep the room sealed until her death in 2002. It was only after Dolores Olmedo’s death that the museum was able to gain access to the sealed bathroom and then began the process of cataloguing the hundreds of items that had been placed within those walls and frozen in time. As a curator and art historian, that would have been a dream job to have been a part of.

As you moved into the last two rooms of the exhibition, her personal possessions were front and center. The six cases that held some of her most intimate things were laid out in two rows of three. It gave the impression of being within a dormitory as the display cases themselves were beds; replicas of her bed. The irony was not lost on me that her bed was a place that she spent a good deal of time within due to her injuries and multiple surgeries and now her possessions were laid out on a “mattress” between the four posters of these faux beds. The outer walls of this room were lined with photographs and personal letters. 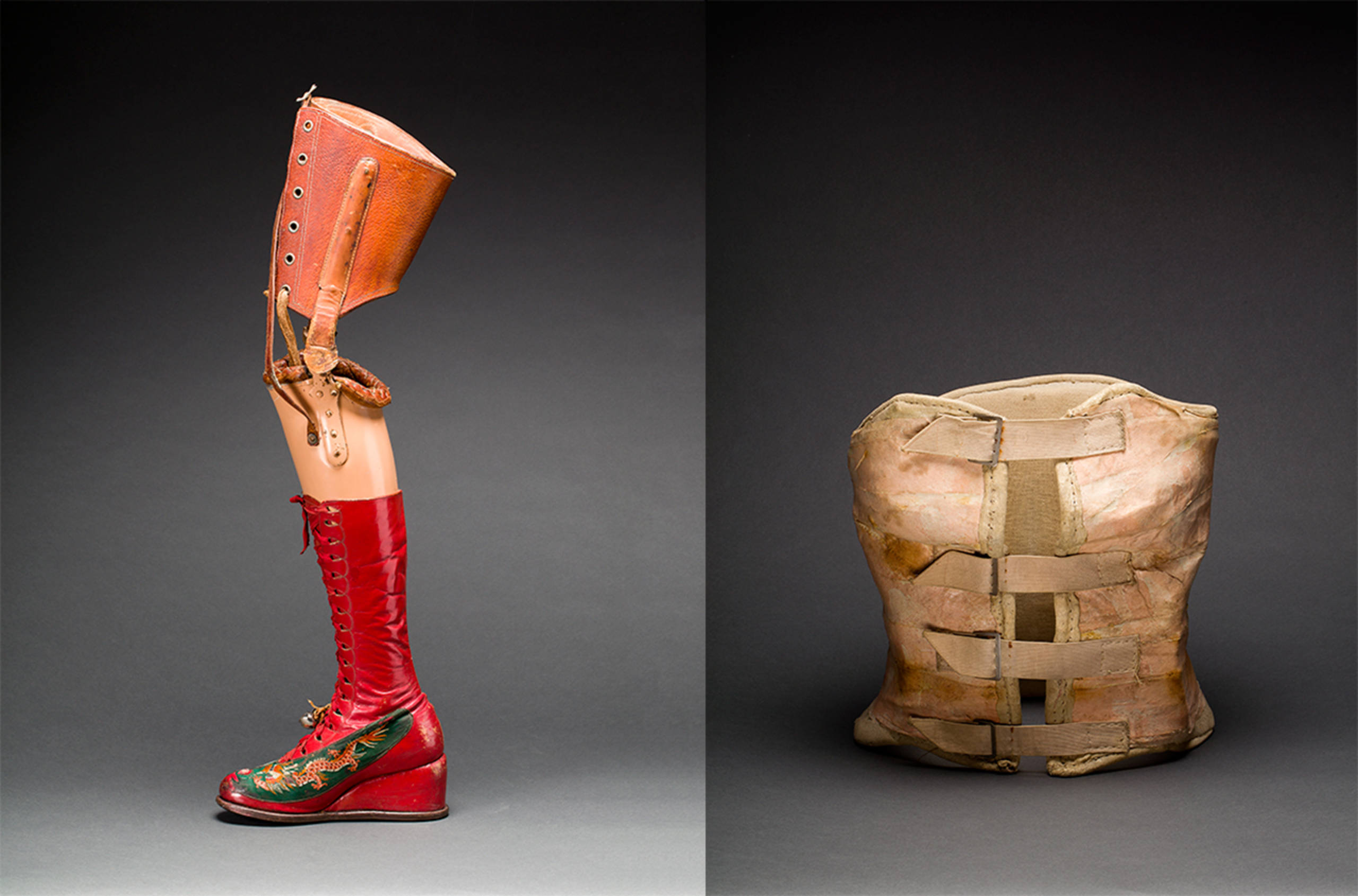 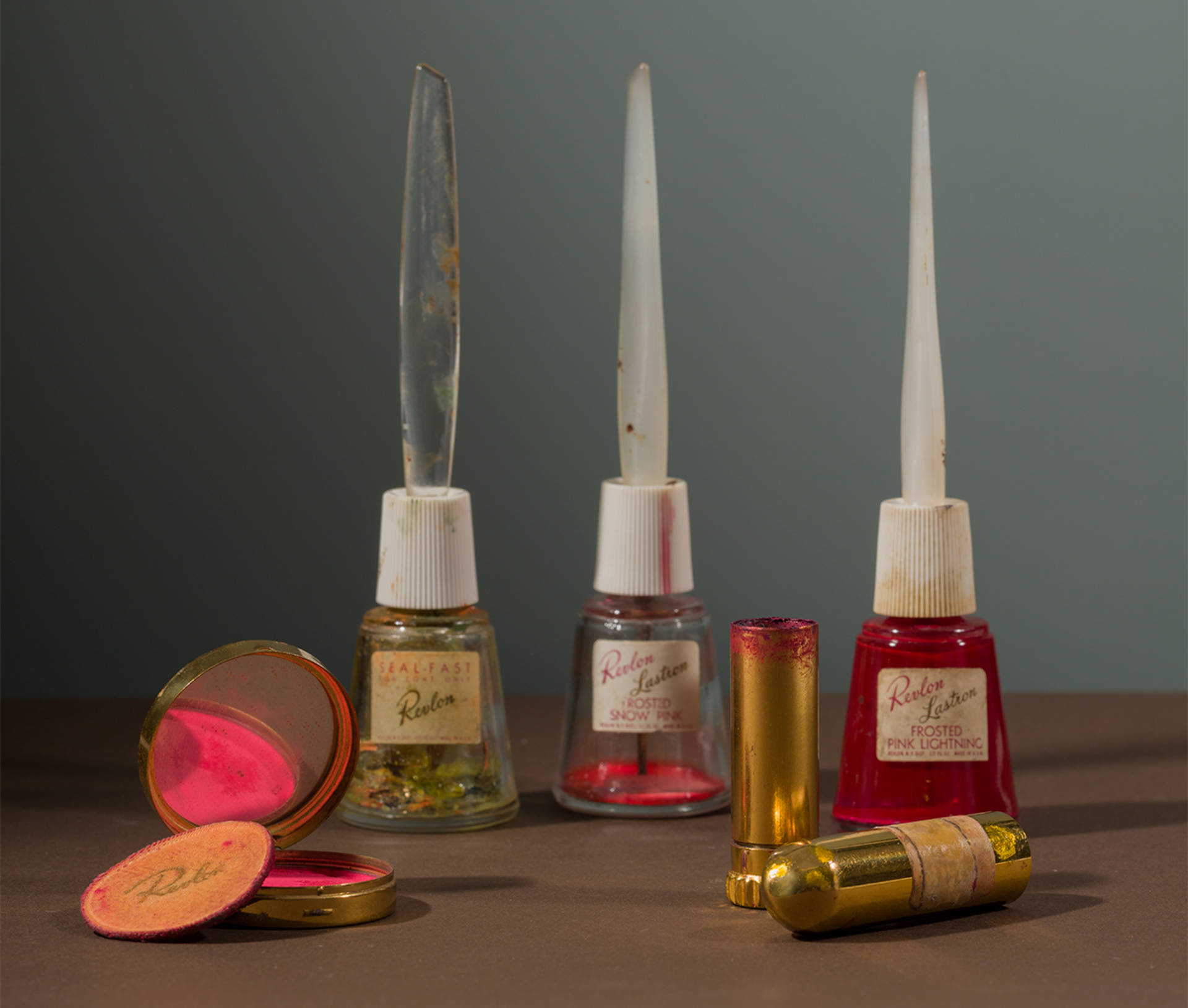 Just to name a few things, displayed within those cases were her Revlon nail polish bottles, lipstick, sunglasses, Pond’s cold cream, shoes, her plaster corsets that she painted, her prosthetic leg, crutches, and perfume bottles. It was extraordinary to me that these things still existed and the condition they were in, was astounding! If you are very, very lucky an artist’s palette or a few bits of paint that they used might still exist, but never in my wildest dreams would I imagine someone’s make-up still being in existence.

The final room of the exhibition contained a huge case in the center of the room, displaying her clothes, with self-portraits, jewellery and other objects along the outer walls. To see so many items of her clothing in person that she had been photographed wearing was phenomenal. To have stared at photographs of her for most of my life and then to see that very outfit in front of my eyes was almost beyond belief.

One thing that struck me in this room was a necklace that had been created out of different sized pieces of jade. At the center hung a carved jade hand that was formed into a fist. It was quite large and I wondered if the weight of that around her neck ever bothered her? Anything that would have put pressure on her spine must have been uncomfortable, but yet she wore the necklace any way.

In a way she curated her own life and her pain through not only her artwork, but her clothing. Each item carefully chosen, colourful lipstick and nail polish carefully applied. Her hair braided in a very specific way with ribbons worked into it. There was an intimacy to this show, it almost bordered at times on being too intimate, like I had snuck into a place I shouldn’t be and opened the dresser drawers and rifled through them. It was an incredibly unique perspective on a woman that I have long admired and in a strange way, seeing so many of her personal belongings almost made her more mythical than not.

*As I enter exhibitions it is sometimes difficult to take off my curator/art historian “hat”, in the back of my mind I’m always considering the layout, I watch how others interact with the displays, or move around the exhibition, I pay attention to signage and font usage… One thing I was fascinated by within this show were the mannequins that were dressed with her clothes. The video below is a captivating look into how the V&A created them. Enjoy! 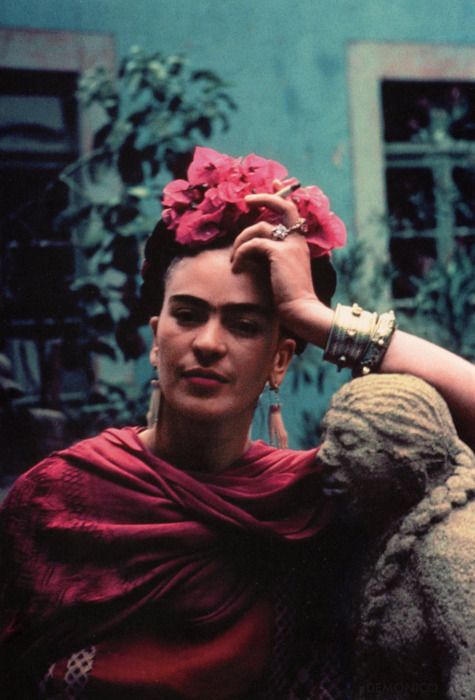 “Hello, Friday! We’ve been waiting on you all week!”

I don’t know about anyone else, but I have been waiting for Friday all week! This week has been a roller coaster, but we’ve marched on.

Mr. Michie surprised me ages ago with tickets to see an exhibition of one of my favourite artists, Frida Kahlo. There is an exhibition at the V&A of her personal things. So that’s on the weekend agenda as well as cooking together, listening to music, enjoying the sunshine and soaking up life.

I hope you have a wonderful Friday, wherever you may be today! ♥ I have long been an admirer of Frida Kahlo. I am of the opinion that certain artists speak to you on a level that goes beyond simply “liking” or “appreciating” their work. Kahlo speaks to me. One painting in particular that I always reflect on is, The Two Fridas, 1939. It was painted after her divorce from Diego Rivera. The two Fridas are sitting, holding hands with their hearts interlinked. One enrobed in traditional Tehuana dress and the other in westernised clothing.

In catching up with some blog reading this week, I read a post on Chocolate and Zucchini. Clotilde wrote about witnessing a friend’s thesis defence, on the experience of refugee chefs in Paris. She opened with a poem by Nigerian writer Ijeoma Umebinyuo, called Diaspora Blues:

The lines Umebinyuo wrote spoke to me. I’m not entirely where I want to be right now. I’m striving to keep to the motto “bloom where you’re planted”. But I feel caught between my two worlds. England is becoming a place that I don’t recognise. It’s political agendas are disturbing. It appears that there is no room for growth. The people are becoming even less friendly than they already were.

We are running down a path and every time we come to a cross in the road and make a decision about our direction, it turns out that we keep coming back to the same path. Timing is everything and maybe this is where we are meant to be right now. Even if I don’t fully see or understand it. My Grandpa always said, you never see the whole puzzle at once. There is a reason for everything and I truly believe in that.

But, I’m ready for a change. I’m ready to see what comes next. I took a leap a little while ago and it turned into a dead end. So, I’m backing up and going down the next road. I hope it brings me closer to my dream. And I hope the path we’re on, brings us closer to our dreams. ** Although I pinned this image as a quote attributed to Frida Kahlo, I was misinformed. This quote actually comes from a poem entitled, Frida Kahlo to Marty McConnell, by Marty McConnell. You can read the full poem here.