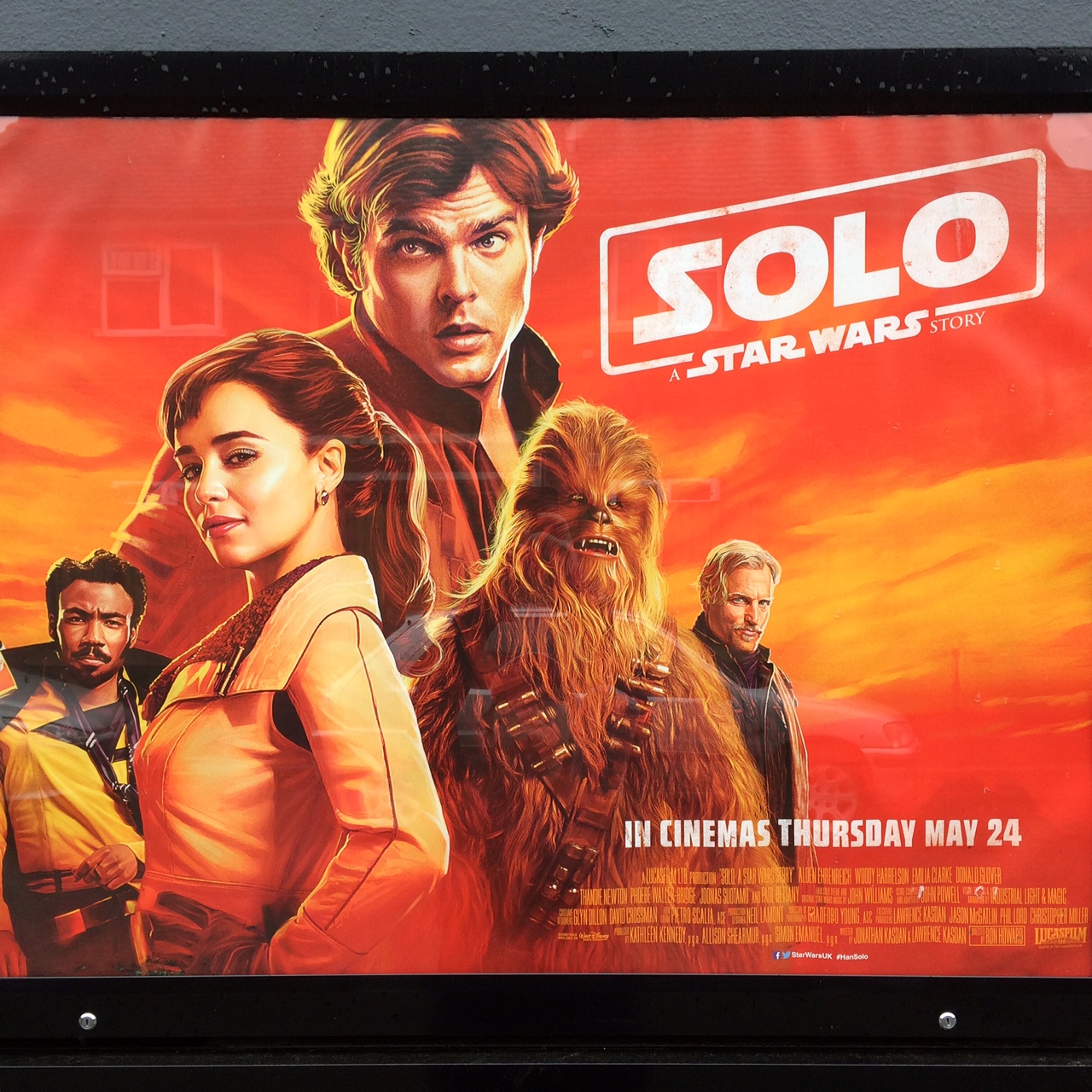 As Rod Stewart croons, “Tonight’s the night!”. We’re going on a date to see Solo: A Star Wars Story. And I can’t wait! Popcorn, holding hands with Mr. Michie, a tub of these heavenly chocolate covered honeycomb bites our movie theatre sells to share, all equals happiness to me!

{I snapped this image of the movie poster on my morning run. I love its old school look!} We went on a movie date Saturday night. I had booked the tickets weeks ago in advance to surprise Mr. Michie. It was a packed house. The atmosphere was buzzing! We ate popcorn, held hands and just breathed it all in.

We’re still digesting it. A lot happened. I was very happy in the way some things were portrayed. But that’s all I’ll say. I don’t want to spoil it for anyone else. This weekend we tried a restaurant that has been on our list for a long time, Dishoom. All I can say is WOW! We got in just in time, when we left, the line was at least 60 deep heading down Kingly Street.

We sat in the bar while we were waiting for our table. I had an East India Gimlet and it was heavenly. The restaurant itself is old world charm meets 60s kitsch. The music was making me very happy! They even played one of my favourite songs, “Jaan Pehchan Ho”. (I don’t truly know if I love the song or the dancing scene in the film better. It’s just too good! Even my niece loves it. We’ve had a few dance parties on the rug together to this tune.) We feasted on lamb samosas and far far, while we perused the menu. We decided we would mix and match dinner and share, so we had the best of both worlds. I ate the “Chicken Berry Britannia”. YUM, doesn’t even begin to describe it! Mr. Michie had the “Chicken Ruby” I made sure I saved room for dessert and tried the pineapple crumble. Everything was just wonderful. We can’t wait to go back! I think I just might have our date night for this week already planned! 😉

Mr. Michie met me last night in town after work and we went on a walking adventure: Lumiere London. A selection of international artists lit up London and it was magical!

These are just a few of my shots. It was freezing outside, but the atmosphere was just incredible! They had shut down Regent’s Street so you could easily manoeuvre around, which was fantastic. Seeing Westminster Abbey lit up like that was amazing; it was surreal. I’ve had a few opportunities to work on projection projects like this, which made me appreciate what these artists have done even more. It was a really fun date night in London. I gave Mr. Michie an early birthday present tonight and took him to see Star Wars:The Force Awakens. I booked our tickets a few weeks ago, we were really lucky as we got the last two seats on sale. We ate popcorn, we held hands and we re-lived our childhood.  J.J. Abrams truly rekindled the magic of the original trilogy. We LOVED it! And, that is all I shall write as I don’t want to spoil it for anyone else. Since this time last week, I have been pretty much out of commission! I got a terrible bug and it zapped all of my energy right along with it! I did attempt to go into work on Wednesday. I stayed about two hours and then had to leave, I came home and slept the afternoon away.

This weekend, I finally started to feel like myself again. We stayed in the cottage this weekend and Mr. Michie and I decided to try a new “Date Night” scheme. In the run-up to Valentine’s, I had read a “Valentine’s Day Menus” post on Shutterbean. In the article, she mentions pairing menus with particular movies. This is something we have done before, but we decided that we would start to make a game out of it and attempt to do it at least twice a month.

Last night was our first “M&M Date Night”. The M&M = Movie & Menu. It was a success, we kept it simple, since I was still on the mend. I’ll share more tomorrow, but for now, I just wanted to say, “Hello!”. I’ve missed coming to this space and I’m happy to be back in action.

I spent the day by myself wandering in and out of my favourite London spots. I had a bit of Christmas shopping to do and my path took me from one end to the other. I passed the lego reindeer in Covent Garden: I went shopping at Fortnum & Masons, always a sumptuous feast for the eyes: I stopped by Lina’s for some Italian Christmas pastries: And I treated myself to an afternoon showing of “It’s A Wonderful Life” at the Prince Charles Cinema. Which is one of the greatest little movie houses in the world! It was bitterly cold outside, but I was snuggled up with popcorn and a coke watching an old black and white Christmas movie! It was a day of bliss!

The merry-go-round at the Leicester Square Christmas Market, where I waited for Mr. Michie to meet me for a dinner date: I love when we get to have totally un-interupted time together. We even went past a Christmas Party Bus on our way home, too cute! Today, completes our first back to school week. It has been busy, hectic, I’ve had a lot of catching up to do with colleagues and students, a fair bit of running around and unpacking deliveries and prepping studio spaces for the new year with brand new materials. We’ve not slowly got back in to the swing of things, instead, we’ve dove right in. I kinda like it like that.

The 5am wake-up has made me very excited for tomorrow morning as I am turning the alarm OFF! Tonight we are getting gussied up and going on our first back to school date night of the year to see the Virginia Woolf exhibition at the National Portrait Gallery. I love that they have late nights on Thursdays and Fridays, it is always a treat to visit on these evenings, especially in the winter, when it gets dark early, there is something magical about being in a museum at night.

After the exhibition, we are heading out somewhere for delicious food, I think Five Guys french fries might be calling my name, but we’ll see.

Mr. Michie was at a conference today and he surprised me and picked me up after work to take me on a date! There are no pictures, we were having too much fun to snap a photograph of dinner or the sunset that greeted us. We chatted and walked and munched on french fries and vanilla cokes. It was just the two of us. I felt like a college girl again, when he would pick me up after work and whisk me away on a weeknight date. I savour these moments when the it feels like we are the only two people in the world, 14 years together and he still makes me feel that way! I’m lucky, more than that, I’m blessed and I know it!

Now, everyone has their quirks, some more than others. I have my own, but on the whole I am a pretty go-with-the-flow girl. However, my relaxed approach to life was severely tested a few nights ago, when I was eating dinner with Mr. Michie.

Now, I’m going to digress for a moment and talk about Howard Hughes. As well as being a genius, it has been well documented that Howard had a few quirks of his own, portrayed effectively by Leonardo DiCaprio in Martin Scorsese’s biopic. I think that you could argue that half of his issues stemmed from his mom with the constant need to be rid of anything and everything germ wise. He seemed to keep a fairly strong grip on his OCD until his plane accidents kept him in so much pain. Then he went, just a little, off the deep end.

Anyway, there is a scene in the movie in which he takes his then girlfriend, Katherine Hepburn (played by Cate Blanchett) to a club. Now, everyone who works at the club knows he has a prefrence for things to be a certain way. He orders a steak and peas. Now, the peas have to be of a certain size and quality – arranged in rows on his plate, so nothing is touching. Errol Flynn (played by Jude Law) drops by their table and in a very brazen and obnoxious manner reaches over the lamp and grabs a pea off of Howard’s plate and pops it into this mouth. The look on DiCaprio’s face is one of utter disgust. He is deeply upset, he can’t eat, someone has touched his food, he puts his silverware down and is done.

Now, on Friday night, Mr. Michie took me on a date. We went to one of our favorite restaurants, but to another location they have opened, that is nearer to my school. They had the more established staff working the tables and the new staff wandering around cleaning and clearing. We had mostly finished our dinner, but I was still munching away on my tortilla chips when one of the new girls came by and picked up Mr. Michie’s plate and then mine, I just stared at him, she had just watched me put a chip in my mouth, but I suppose she thought she was there to clean up, so that is what she was going to do.

Now, at this particular restaurant, when you are done, they take everything off the table, including your paper placemats that serve as their menu prior to bringing you the dessert menu. The one thing in this whole process they don’t touch is your drink. Well she came back, grabbed the placemats, picked up Mr. Michie’s empty beer bottle and grabbed my half full glass of coke! There was no way to tell her that I was still drinking that, because in order to get the glass she placed her fingers into the glass to pick it up. Her fingers! At that point I was so done. I had, had it. In that moment, I was Howard Hughes and the girl who had drawn out one my own quirks was Errol Flynn.

One of the other staff must have noticed the stunned looks on our faces because they asked if we were okay. We just asked for the bill, they were uber busy and to be honest, I don’t think that it would have made a difference if we had made a fuss. We got the bill, paid and before we had even left the table, she was already wiping it down. Now they weren’t that busy and there is such a thing as customer service and general politeness. Just wait one minute, let us walk away first, for goodness sakes!

Howard, if you’re up there? As those fingers gripped the inside of my glass, I felt your pain. It’s like an invasion, an assault. Those peas were his and they were how he wanted them! That glass of coke was mine and I was not finished with it!